Breastfeeding as birth control, as a contraceptive, how well does that really work?

We sort out the safety of using breastfeeding for birth control, the conditions needed for it to work, benefits and disadvantages, and other possible options in this thorough article. 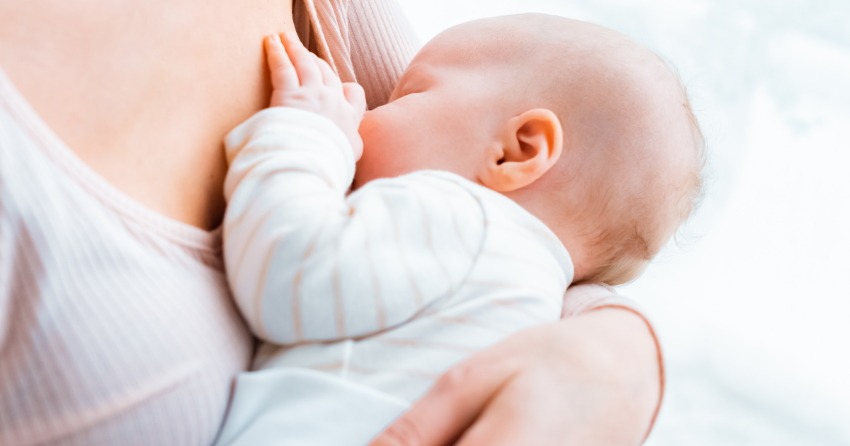 PinWith a new baby in your arms, getting pregnant again is probably not a priority in the near future. Sex may not be very appealing either, with all the sleepless nights and tired body trying to recover from carrying the baby for 9 months and delivering him into the world. With this, the risk of getting pregnant will be at an all-time low.

However, you may still want to consider birth control, since you are probably not going to aviod sexual intercourse forever. For exclusively breastfeeding mothers, the actual breastfeeding CAN be a form of contraception—if done correctly.

Your Guide to Breastfeeding As Birth Control

Why is Fertility Reduced by Breastfeeding?

Why does exclusive breastfeeding prevent ovulation?

The complex medical explanation of how breastfeeding works to decrease fertility is this:

“The mechanism linking the two is believed to be a neurally mediated hormonal reflex initiated by the suckling stimulus, whereby increases in the pituitary hormone prolactin act either upon the hypothalamus or directly on the ovaries to prevent ovulation.” (Alan Macfarlane – 2002)

In other words, the suckling that takes place during breastfeeding stimulates an automatic trigger that produces a hormonal reaction, so that the level of prolactin increases. Interestingly, studies have shown that increased levels of prolactin inhibit ovarian activity (no ovulation). The more times and the longer the baby suckles on the nipple, the higher the prolactin levels increase.

The contraceptive effect (or the decrease in fertility) while breastfeeding is directly linked to an increase in prolactin.

Interestingly, studies have shown that levels of prolactin increase as the level of nutrition decreases in the mother as well, so this could be due to an automatic contraception “device” that the female body has innately and is used in times of hardship. (No food = not a good time to have a baby)

How Effective is Breastfeeding as a Birth Control Method?

It should be known to new moms that LAM is a short-term type of contraception. It depends on the woman’s menstrual return since childbirth, how she breastfeeds her baby (feed on demand, no supplementary food given, and how long the baby suckles on her nipple), and on the baby’s age (less than 6 months), as shown below: 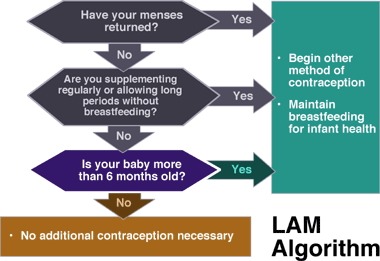 When all these criteria are met, meaning the woman has been amenorrheic since her baby was born, has been exclusively breastfeeding her baby, feeding on-demand around the clock, and with a less than 6-month-old baby, there is a very low chance of pregnancy. If breastfeeding is done correctly, it is 98% effective in preventing pregnancy; 99% according to some studies. This can be compared with condoms (85% prevention) and birth control pills (92-99.7% depending on the type).

Here’s a comparison of some of the known and commonly used contraceptives as to the chances of getting pregnant (with the right manner of use):

For LAM users, when the method is consistently and correctly done (used), the chances for pregnancy are very low as opposed to other temporary contraceptives.

So what does doing LAM correctly entail?

When is the Lactational Amenorrhea Method (LAM) Not Effective?

A woman should be thoroughly advised on the possibilities of pregnancy when this happens. And to be offered other birth control methods that may be more effective for her and her partner.

Tips to Enhance Breastfeeding as a Natural Method of Birth Control

It is important to understand that the return of fertility will vary from woman to woman. Your physiology coupled with the nursing patterns of your baby will determine when your fertility will return to “normal.” There are a few things that you can do to help you get the most out of breastfeeding as a reliable and natural form of birth control.

The total amount of time that is spent breastfeeding in 24 hours along with the frequency at which you are breastfeeding are the two strongest factors that determine the return of fertility. Should your baby start nursing less often or for a decreased amount of time, the effectiveness of LAM is reduced. To help maintain both of these circumstances, consider doing what is called ecological breastfeeding.

The seven standards of ecological breastfeeding are the following:

Ecological breastfeeding is stricter than LAM, which doesn’t mention lying down for breastfeeding or co-sleeping as requirements. But it is effective! The average return of menstruation for ecologically breastfeeding mothers is between 14 and 15 months postpartum.

A sidenote on co-sleeping…

Co-sleeping is common (I did it too) and you can read about safety measure for co-sleeping here. However, you should be aware that the American Academy of Pediatrics recommends room sharing, but not bedsharing for babies to minimize the risk of Suden Infant Death Syndrome.

The risk of SIDS is real and if you do want to co-sleep, you really need to read up on how to do it in the safest possible way.

The Benefits of Using Breastfeeding as Birth Control

There are a lot of benefits from LAM:

As much as it benefits the mother, it is also equally beneficial for the new baby:

The Disadvantages of Breastfeeding as Birth Control

However appealing this method is, it is still the hardest to stick to. Here is a list of disadvantages of LAM as birth control:

Other Alternatives for Birth Control While Breastfeeding

Pills containing estrogen are not safe for breastfeeding as it decreases the milk supply in your body. The same goes for the patch or the ring (estrogen-containing products).

Do I need to stop breastfeeding to get pregnant?

You can still breastfeed if you want to be pregnant, but the consistency and frequency should be decreased for your fertility to go back to normal. Always remember the mechanism of LAM: exclusive breastfeeding and feeding on demand (and suckling reflex of your baby), no menses for the past 6 months, and no supplemental feeding. A break in any of the criteria for a successful LAM will lead to fertility and later on pregnancy.

What are the signs of ovulation if I am breastfeeding?

I am pumping – can I use breastfeeding as birth control?

For LAM to be effective as a birth control method, the baby has to suckle frequently and consistently on the mother’s nipples. Pumping will be a less efficient and effective way of expressing milk. And will be a little different from the actual suckling reflex of your baby. This will make LAM less effective, so the answer is no.

The bottom line is that breastfeeding is an excellent form of birth control when done correctly. During the first three months, the chance of pregnancy is almost zero, less than two percent from three to six months and after six months the risk goes to 6%.

A mother’s commitment to doing this correctly will determine the success of this natural birth control method.

What is the lactational amenorrhea method of contraception?

Have you considered or tried breastfeeding to protect from pregnancy? Please share your thoughts by leaving a comment below.

Previous articleOne Mom’s Story and What You Need to Know
Next articleEasy Roasted Zucchini (Ready in Just 10 Minutes!)

What Black Women Should Know About the Second Trimester

New Research Discovers How to Spot Babies at Risk of SIDS

What Black Women Should Know About the Second Trimester

New Research Discovers How to Spot Babies at Risk of SIDS