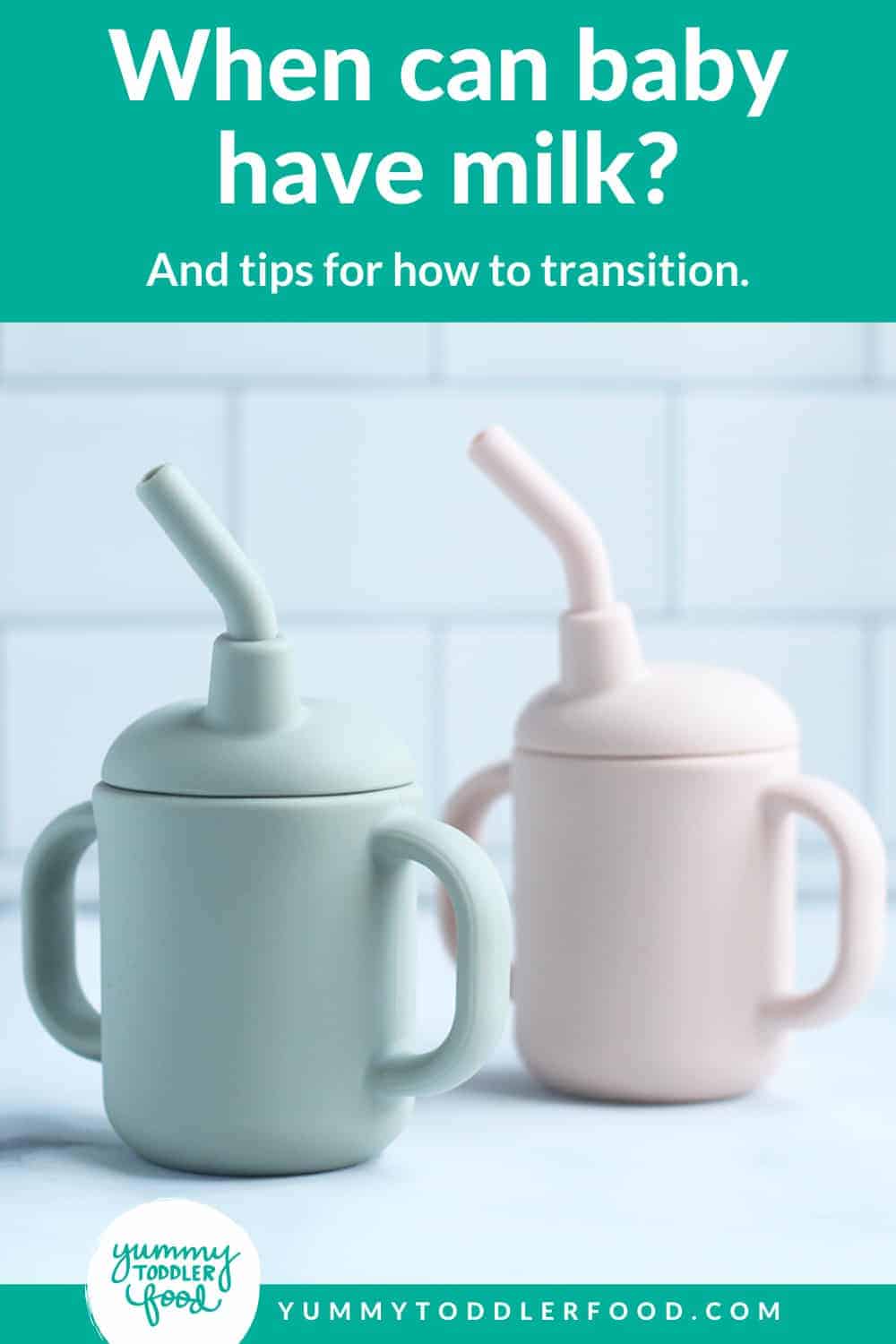 If you’re wondering when baby can have milk—and which type is best, when to introduce cow’s milk, which alternative milk is best, and how to transition from formula or breastmilk—this post has the answers for you.

When can a baby have milk?

The American Academy of Pediatrics recommends waiting to introduce cow’s milk until baby has turned 1, or at 12 months. This is because unlike the proteins in dairy like yogurt and cheese, the ones in cow’s milk are harder to digest.

Cow’s milk also contains a large amount of proteins and minerals, which can stress a baby’s kidneys. It may even cause iron-deficiency anemia if given in large quantities. (By “large quantities”, think if you were to put cow’s milk in a baby bottle or sippy cup.)

It is not recommended as an alternative to baby formula.

The good news? Milk becomes easier for babies to digest and tolerate as they get a little older and hit the one-year mark.

When it comes to using smaller amounts of cow’s milk in baking or recipes, check with your pediatrician for advice specific to your family.

(I generally recommend using plain nondairy milk in baking for babies to be on the safe side.)

Once a child turns one, they should have whole milk, as little kids need the fat for brain development and growth.

How to Introduce Cow’s Milk

Anytime after baby turns 1, you can put a small amount of milk into a sippy cup or small open cup. It’s best to start with a small amount simply to avoid any potential waste.

Remember that this is a new food for baby and they may or may not like the taste. It can take some getting used to, just like any other food, and as long as baby is offered a range of dairy products throughout the day and week, they will likely meet their calcium needs.

(Not all kids like or drink milk and that’s totally fine!)

You can also stir some into oatmeal they like or use it in a recipe, such as these ABC Muffins.

TIP: Here are my favorite sippy cups for toddlers, including easy-to-use transition cups.

How to Switch from Formula to Cow’s Milk

If transitioning from formula to cow’s milk at 12 months, use whole milk—one and two year olds need the high fat content to help with brain development—and start by replacing 1 ounce of prepared formula with milk at a time.

This gives baby’s system and taste buds a chance to adapt.

Side Effects You May See in the Transition

It is normal for bowel movements to change during the change from breastmilk or formula to whole milk (and during the phase of eating more and more solids through toddlerhood). A child may have fewer dirty diapers or the consistency of their stool may change. Wet diapers should stay similar.

If constipation becomes an issue, look at the bigger picture of what the child is eating and reference easy options for Toddler Constipation for help.

For plant milk with similar nutrition as whole cow’s milk, you’ll want one that has fat, protein, Vitamin D, and calcium if possible. This usually means plant-based milks that have been fortified with pea protein such as Ripple Milk, Silk Protein Milk, and Not Milk.

You can use plain or vanilla. Unsweetened is the most versatile (and is made without added sugars.)

You can use any other type of nondairy milk, but be sure to include many other food options with fat, calcium, and vitamin D throughout the week.

Is it OK to continue giving formula instead of milk?

Unless your pediatrician is concerned about growth or another medical condition, toddler formulas (or continuing baby formula) is not necessary. And it may be harder for your child to eat a range of solid foods if they are full from the formula.

Changing to whole milk is often much less expensive and is easier to serve.

When a Child Refuses Milk

The American Academy of Pediatrics recommends that toddlers have 2-3 servings of dairy per day, which can include milk—but it doesn’t have to. So if your child doesn’t like milk, that can be totally fine. It is very common.

Talk to your doctor about any concerns. You may also have some luck using milk in smoothies or DIY Flavored Milks.

What happens if you give a child milk too early?

The main concern with milk for kids under age 1 is that a large amount can be stressful to their kidneys. It may even cause iron-deficiency anemia if given in large quantities. A small amount is likely fine, though check in with your pediatrician with specific questions.

Can babies have nondairy milk?

Yes, though with caveats. Nondairy milk should not be used as a substitute for formula or breastmilk, though it can safely be used in foods like oatmeal or baking.

Use a plain, unsweetened nondairy milk to avoid added sugars for baby if possible. And be aware of any potential allergies if using a nut milk.

What type of cow’s milk should I offer baby?

Plain, unsweetened whole milk is best for 1 year olds, so plan to start to transition and offer it after baby’s first birthday.

Can babies have water?

Babies should be offered water at 6 months, or when they start solids. Water can help keep them hydrated and make food easier to eat, but it should not be given before 6 months since we don’t want it to take up space in their bellies needed for formula or breastmilk.

Is it safe for babies to have milk in food?

The main concern with cow’s milk for babies is if it’s given in large quantities. You can check in with your pediatrician about using it in smaller quantities in recipes. I err on the side of caution and recommend unsweetened nondairy milk. (Many people also use formula or breastmilk for making simple foods like baby oatmeal.)

Best Tips for Babies and Milk