When does a baby stop drinking formula? (And What to Replace it With)

This post may contain affiliate links. If you shop from one of our links, we may earn a commision.

When does a baby stop drinking formula? It’s such a common question that deserves explanation to help you handle the transition with ease. Here’s what you need to know. 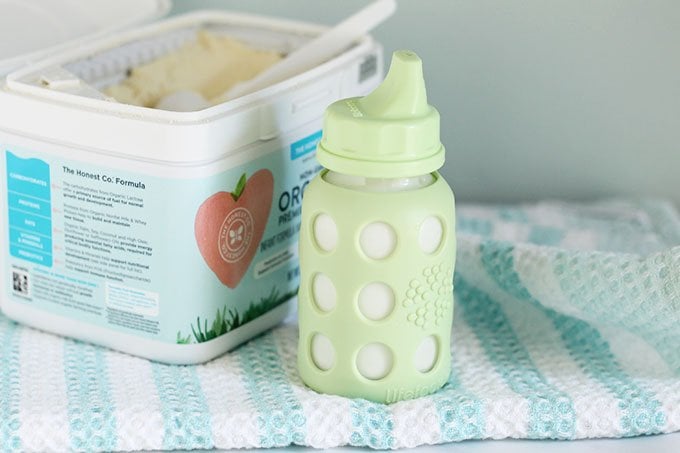 When does a baby stop drinking formula?

Babies should stop drinking formula by 12 months of age. There are a few reasons for this.

Why does a baby need to be 1 before they can drink milk?

Babies under 12 months of age have immature digestive systems that aren’t very good at digesting milk proteins. The proteins and minerals in cow’s milk can stress a baby’s kidneys and can cause diarrhea. Thankfully, this improves by the time they are a year old.

We want to avoid cow’s milk as a drink, but also cooked or baked in other foods. An easy alternative is plain unsweetened nondairy milk.

What kind of milk is best for toddlers?

When you transition from formula to milk, you should use whole milk and not reduced or nonfat milk. One year olds (and older toddlers too!) need fat for proper growth, so you want to be sure to use milk with fat in it.

Read more about transitioning to cow’s milk here—including ratios, the type of milk that’s best, and how to know if a child is tolerating milk well.

When should a baby stop drinking from a bottle?

The American Academy of Pediatrics recommends that we start to wean a baby from a bottle between 12-24 months of age. Keep in mind that weaning from a bottle is a process and it may take a little longer for some kids than others.

A good goal is to aim to be totally done with bottles by age 2.

TIP: If your one year old is still drinking a bottle of milk, you can start to transition to a sippy cup.

When do babies stop drinking breastmilk?

This is a much more nuanced and individual decision than stopping formula and some families choose to wean from breastmilk at 12 months (or earlier!) and others much later. I’ve experienced weaning at 14, 17, and 20 months—both because my kids seemed ready and I was also ready to move forward—but there’s no one right way to do it.

If nursing seems to be inhibiting your child’s hunger at meals and snacks for food, you may want to consider starting to wean, or simply offering some food before breastmilk. It can be more difficult for kids to learn how to handle textures and flavors the longer they wait to start solids, so giving them ample opportunity to have a lot of food experiences can be helpful.

When should I wean my baby off formula?

According to the American Academy of Pediatrics, you can start to wean babies off of formula at 12 months when their digestive systems are mature enough to digest cow’s milk.

Do babies need formula after 12 months?

Babies digestive systems mature by their first birthday, allowing them digest the proteins in cow’s milk. If there’s a medical or feeding concern, it may be recommended to keep it for a while longer, but typically babies don’t need formula after 12 months.

Unless there’s a medical reason and information from your doctor, a 3 year old doesn’t need to be drinking formula.

Can I give my 18 month old formula?

Unless there’s a medical reason and a recommendation from your doctor, an 18 month old child doesn’t need to be drinking formula. They can drink cow’s milk, water, or a nondairy milk option.

I’d love to hear your feedback on this, so please chime below!