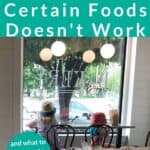 When our kids want to eat a lot of certain foods, or we worry about portion sizes or nutritional intake, our first impulse can be to simply restrict those foods. But, that often unintentionally makes the situation more stressful for everyone. Learn why restricting foods isn’t the answer to health concerns—and what to try instead.

What is Food Restriction?

Even if we think we’re not dieting, putting our kids on diets, or counting calories, it’s so easy to slip into a restriction mindset simply due to the messages we get all day long from the news, social media, and food packaging.

There are claims that some foods are “healthy” or not, “good” or “bad”, “processed” or “clean”.

And when the kids clearly have a preference for certain types of foods, our natural instinct is to cut them off so they don’t eat too much of those foods.

Unfortunately, that can create both power struggles and make the preferred even more appealing—because as soon as you say “no” or “enough”, the kids naturally want more. (This is true for toys and activities that are interrupted too, as I am sure you have experienced!)

This also can undermine being in touch with our natural hunger cues since we’re externally deciding what’s “enough”.

I am sure you’re thinking, “But I can’t just let the kids eat XX all day!”. I hear you. Keep reading.

Research shows that the more limited you feel around a food and the more you you feel like you can’t have it, them more you will crave it—and then eat more of it when you do get it since it can feel like you may never have access to it again.

So when you tell a kid to eat more fruits and vegetables and less desserts, you’re making desserts inherently more appealing since they are off limits.

Which means that they may feel slightly out of control whenever they do see desserts, and may try to eat a lot of them—or more than they would if they regularly had access to them. And/or they may get SUPER excited about them. (Which is often misconstrued as a “sugar high”.)

TIP: Here’s a link to a study that showed that kids who were forced to eat soup ate less of it and liked it less than kids who were allowed to eat according to their own cues.

Rely on Division of Responsibility

If you worry about how much or which foods the kids are eating, checking in with the principals of the Division of Responsibility can be helpful.

Using DOR lets you feed your family with confidence by letting the kids eat their fill from the foods you offer—without you needing a nutrition degree or having to count grams or portions of anything.

You just need to remember your job when it comes to meal time: You’re in charge of which foods are offered, when they’re served, and where. And the kids gets to decide how much of each food, and which foods to eat.

And if the kids want more of one food?

If you have more, everyone has shared and had some, and you don’t have to get up to cook more, let them have more. Kids don’t eat like charts and often eat more or less than one food group or another at any given meal or snack.

This means they might want to eat all of the blueberries at snack and they’ll leave their grapes at dinner. Zoom out at what they eat over the course of a whole day (or even a whole week) and I bet you it will look more balanced.

Fundamentally that lets you bypass the nutrition question, even though it’s a little hard to wrap your head around it.

The foods that usually make us pause are foods that can either be classified as “snacks” or “treats”. In our house, we serve dessert with dinner as much as possible—and usually limit it to one portion.

And then have regular opportunities for the kids to have their fill of a dessert, like if we bake cookies together or go out for ice cream.

Remember: Kids can like all kinds of foods. Just because they love chocolate or cheese crackers doesn’t mean they won’t also love broccoli or avocado. Kids have capable palates, just like we do. If we can trust that—and also remember that unpredictable eating is a very 100% normal part of childhood development—we might be able to relax about some of this.

We all have a LOT of information in our brains about food—we are bombarded with messages about foods all day long and much of it isn’t even true.

So when you are concerned about something the kids are (or aren’t) eating, it can help to ask yourself “what am I worried about here?”. Or, put another way, “Where did I hear this message?”.

That might help you to be able to see what’s really causing your concern—maybe it’s something fairly nebulous such as body size or weight, or it’s a concern like having enough food for a future meal or a medical issue such as anemia or chronic constipation.

TIP: Virginia Sole-Smith writes a really great newsletter that goes into topics such as this one. Subscribe here.